The Dutch get in on getting American food wrong

"American" week at German grocery stores evokes strong emotions for me, including the desire to laugh, cry, be sick, or when I'm feeling adventurous, maybe even try it sometimes. There are usually very few things that I do want to try, though, because it's either food I wouldn't eat even when I'm in the US or it looks disgusting. I had yet to participate in "American" week shopping in another country, though, so during a trip to the Netherlands this winter, I perused their display for their take on what we eat.

This one landed a solid nee (no) for me: some sort of "American" sauce for fries. 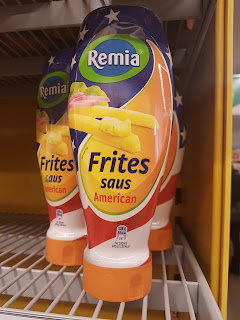 Based on my non-existent knowledge of Dutch, but with the ability to somewhat decode the ingredient list based on my knowledge of English and German, I determined that it has canola oil, mustard, something from corn (a thickener?), vinegar, sugar*, and lots of preservatives in it.

Is this typical American food? Well, the preservatives would almost have me thinking so but as far as what it would probably taste like, I can give a resounding no. And thank goodness for that!

*I would like to continue ranting a bit. Yes, American food and condiments add sugar. However, for German food, I'm always shocked/disgusted by just how much is added. I can't even eat most of the commercially prepared sauces, soups, or spaghetti sauces here because they taste almost as sweet as candy does and it's very off-putting for me. I am wondering if this Dutch sauce would be as sickeningly sweet as the German ones?
Posted by aroundthe at 6:02 PM No comments:

Email ThisBlogThis!Share to TwitterShare to FacebookShare to Pinterest
Labels: American food around the world, Netherlands, Shopping

Oh lawd, when one learns a new language, one can make some really funny mistakes. Recently I made a group of people practicing languages laugh. Who said I wasn't a comedian? Oh wait, it wasn't on purpose.

Me in German : "You could visit Trafalgar Square. There are many grapes, I mean pigeons, there."

(Trauben = grapes, Tauben = pigeons. At least I didn't say there were many baptisms there. I get that one mixed up too.)
Posted by aroundthe at 8:00 AM No comments:

It was so awkward it killed me

My German is finally to a decent level; I've taken various C1 classes so many times that it had better be! However, that doesn't mean that my vocabulary is always adequate, especially for topics that I don't deal with often (or ever) in German, and some topics are a bit too macabre for our textbooks to deal with in detail. Take this awkward conversation I had in German (translated into English for your enjoyment), for example.

At the thrift store

Me, in German : "is this card for when someone dead is?"

Me, delighted: "Oh, good! I mean, it's not good that someone is dead. It's good that it's a sad card. My vocabulary is not so good for death."

He thought that was funny.
Posted by aroundthe at 2:11 PM 2 comments:

aroundthe
From the American Midwest to Southwest Germany, and everywhere in between, I recount my adventures, observations, and tips for travel here. This is a blog about Kaiserslautern especially; there is a ton of information about living, visiting, and enjoying it here.