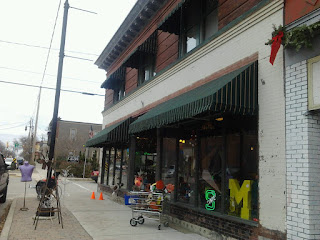 On Wealthy Street, in a southeast neighborhood that is reviving itself through new businesses, a store packed to the brim with curiosities awaits for shoppers looking for the eclectic. The store is part antique store, part local crafts store, and part...well, one wouldn't say junk store so much, but owner Phil Ondersma's title of "stuff" fits very well.

Right down the street from a bustling block of businesses and restaurants such as the Meanwhile and Electric Cheetah, Phil's Stuff is a fun place to visit while in the neighborhood. The store is overflowing with merchandise; some is antique and some is just interesting. Phil specializes in period pieces for historic home renovations. One can find old heating vents, skeleton keys, and doorknobs that are original as well as vintage. Other antiques grace the shelves, too, whether it's the strange ceramic arms that were previously used to display gloves in stores or if it's some vintage magazines.

The store even carries some new items, too. There are some great yard sculptures, including flying pigs made from recycled scrap metal like license plates and bolts, as well arches, metal spikes with decorative elements on the top for garden ornamentation, and many other goodies. Cast metal coat hooks, bottle openers and other tchotchkes in the shape of animals, angels and mermaids round out the unique new merchandise.

Phil is as interesting as the "stuff" he sells. He's often decked out in a festive Hawaiian shirt and brings his little dog to the store too. He is a bit gruff but it gives him character, which certainly explains the eclectic store. He's always busy in the store, whether it's greeting a regular customer, or buying some curiosities to resell from people who bring them by the store. Keep in mind that Phil's travels in search of antiques sometimes make for irregular hours; on some Saturdays, the store might not be open so it's advised to call ahead of time.


For a fun afternoon, stop by Phil's Stuff on a Saturday. After that, it's just a few blocks to bars, restaurants, and other stores on Wealthy.

Posted by aroundthe at 2:55 PM

aroundthe
From the American Midwest to Southwest Germany, and everywhere in between, I recount my adventures, observations, and tips for travel here. This is a blog about Kaiserslautern especially; there is a ton of information about living, visiting, and enjoying it here.